Anybody Out There?! Understand your Followers 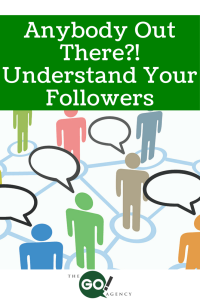 Those who are involved in the world of social media marketing could learn a great deal from a certain advertising star. Have you ever heard of Old Spice? If not, it’s a company that makes toiletries that are geared towards men. It’s been around since 1934 and as such, they’ve had some time to think about their intended audience. For a whole generation, it became the man’s fragrance. However, because of that, once “the greatest generation” that fought in WW2 and came home to reshape America began to enter their golden years, their iconic brand started to “get old” with it. People began to peg the brand with senior men and as such, their young customers started to dwindle. They needed a way to reinvigorate themselves to become popular again with the young crowd. They broadened their product line with multiple fragrances, body washes, and deodorants. Yet what really put Old Spice back into the hands of young twenty-somethings was their marketing campaign. They enlisted Terry Crews and Isaiah Mustafa, two celebrities know for their “manliness”, to endorse the product. Yet they did much more than that. They blew it up!

Their television commercials, which ended up being viral phenomenons, showed the men in such ridiculous poses in often psychedelic settings, that people had to pay attention. They looked absolutely crazy, entitling the campaign “The Man Your Man Could Smell Like”. Yet what was even crazier was that it worked, and then some. See, they didn’t just tap into a younger market, they infiltrated them because they utilized what the youth liked best- quirky, off the wall humor and viral marketing. They knew who they wanted to get and they assimilated the tone of the brand.

Now, we’re not saying you need to hire Terry Crews and put him on a unicorn while holding your product—although that would probably work. But you do need to know who your audience is, and what they want to watch. Like Old Spice, you need to understand how your audience thinks and what they like to watch. That’s the thing- it went beyond a commercial. People actually searched for these advertisements for entertainment value. Now, it’s your turn. Your content needs to go beyond pushy sales. That’s a surefire way to lose followers. You’re going to want to understand the following things to succeed:

Before even clicking that “Sign Up” button on a social media site, you need to answer these questions. Chances are, you already know the answers to them and you’ll be able to translate your pre-existing business tactics onto the web.

What do you think about the tone of audiences? Let’s hear your thoughts!