What Marketers Can Learn From Vine’s Failure 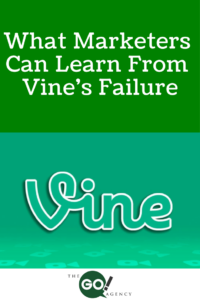 In 2013, an odd little app named Vine popped up on the App Store. A few months later, it was bought by social media giant Twitter. That’s when Vine started to explode. Users were able to share 6 second long videos to their friends, and soon it became a medium of its own. Now in 2016, Vine announced its days are numbered. So, what happened?

Vine could have been one of the big platforms. It certainly was on its way. But there was a problem with it – it turned into a gimmick. Social media marketers seemed to skirt around the platform and stick to the proven formulas such as Facebook, Twitter, and LinkedIn. But what actually happened with Vine was it failed to adapt, compete, and read the signs of the market. It neglected to fight two contenders – Snapchat and Instagram.

Vine could have been what Snapchat is and will become. It’s a powerful tool, sure. But it didn’t cater to the general public, and more importantly, businesses. It stuck to creating funny memes, video clips, and was a testing ground for fledgling YouTubers. But it didn’t expand its service. Those six-second snippets were all it had. We’ve seen with Snapchat and Instagram the need for platforms to adapt, just like marketers do.

Just like those who run these fantastic sites, marketers can’t be in a bubble. You need to see what your competition is doing, what the consumer wants, and adjust accordingly. It’s fine to have a niche, but to be bull-headed is something else entirely.

As a majority of social media marketing experts understand, video is a dominating force and will continue to be in 2017. That’s why you need to forge your marketing strategy in a way that it incorporates what people want. Never forget – people CHOOSE to see your content. You want them to be enticed.

While video is one of the ways of the future, Vine will not be included in that grand vision. While Snapchat reaches new levels of potential, Vine failed to be versatile and appeal to a broad audience. Don’t make the same mistake as a marketer! Learn to adapt!