Marketing Faux-Pas to Learn from 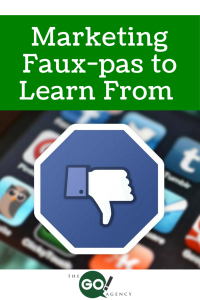 There’s no doubt about it, we live in a society where one slip up can cost you an untold amount of money and a whole customer base. Even if an advertisement was never in any way meant to be offensive, an accidental negative message can crush a company’s image. Marketing can make or break you. How can you stay politically correct without ever intending for a political statement in the first place? Of course, people have the tendency to twist things and distort messages in a light that was never meant to be. However, the best way to protect yourself is to ignore the mistakes of the past. Here are some ads that backfired for their brand:

Talk about controversy, right? All these mistakes show that a message can be taken the wrong way without the creator ever intending anything. It can seem like you’re walking on eggshells, but try to put yourself in other’s shoes. When crafting posts, it is important to realize that EVERYBODY can see what you write and with that, comes a lot of subjective interpretation. Try your best to see your image from any angle possible and get a colleague to play devil’s advocate.

Do you have any other examples or personal experiences in advertising backfires? Share with us below!