Facebook Goes Global: How Their New Translator Will Change Everything 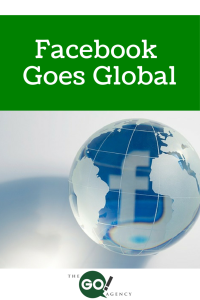 Facebook has been on a roll lately and one can only assume it’s all building up to world domination. Their new tool in the works might make you wonder just how true that is. They have begun developing a content translator that will be able to work with 44 languages.

While Mark Zuckerberg may or may not have plans to take over the world, his team has provided an innovative way to communicate for the 1.5 billion users that do not speak English. As you could imagine, there are quite a few.

Of course, Facebook isn’t alone in trying to solve an age-old problem. Google has offered translation services for years and Microsoft has also been developing new technology to allow communication amongst the world’s residents via Skype. However, Facebook’s translator will be native to their website and we will be able to see posts   rewritten into our native tongue. Before we get into the business side of it, just imagine the opportunities this presents to families and friends. We have always had trouble connecting to those who spoke a different language. However, that may change.

We have seen translators fail in the past. Yet with each step forward, automatic translation software is becoming increasingly accurate. You could imagine the opportunity this raises for companies who already utilize social media. Before this groundbreaking update, Facebook updates were restricted to those who could read the language it was originally written in, unless users endured the hassle of looking up a third party translator. Now, however, the tools will be right on Facebook and the language barrier will begin to fade.

What do you think about Facebook’s attempt to unite the world? Comment below!