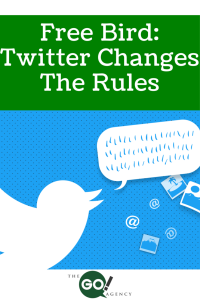 Twitter allows many forms of communication and often times opens up a whole new world for its users. Many of us couldn’t go a day without expressing ourselves on the intuitive platform. However, it doesn’t allow you to write a long-winded novel of a post. For the most part, this is a great thing. Unless you just wrote an amazing post, utilizing all 140 characters, and then your heart drops when you forgot to add a link. Changing a whole post in order to conform to Twitter’s limits can make a writer go back to the drawing board. Even with Hootsuite, Google, and Twitter itself shortening links to 23 characters, that 140 character limit can be a real hassle at times. Well, chirping Twitter seems to be allowing for some longer bird calls with their new update, which will no longer count images and links as part of that 140.

For the most part, it seems to be a great idea. www.UNLESS-OF-COURSE-PEOPLE-START-DOING-THIS-TO-TAKE-ADVANTAGE-OF-TWITTERS-NEW-FOUND-FREEDOM.com As with most things in life, people tend to take advantage of a little leeway. It’ll be interesting to see how Twitter stops that from muddying up their currently clean and sleek layout.

According to an article from Bloomberg, this update can be implemented as quickly as the next few weeks. CEO Jack Dorsey says they’re trying to give users more flexibility on the site. This is certainly a positive step forward, adapting to the times when people can literally write a book on their smartphone of choice, as opposed to the early 2000’s when we were confined to 140 character texts with the assistance of T-9. Those were dark, dark days, but things are looking up in the technological and social media frontiers everyday. Businesses will benefit from this because now they’ll have even more room to express a message to their followers and attract potential clients and customers.

Do you think this update will do some good? www.OR-DO-YOU-THINK-IT-WILL-BACKFIRE.com? Let us know your thoughts!