Learn Snapchat In A Snap! 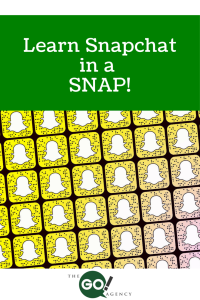 Okay, Snapchat, you have our attention. The app-exclusive social media platform is beginning to hold its own amongst the social media giants, especially for Millennials and younger users. With video’s rise in popularity, it was to be expected. Its interface isn’t exactly where it should be, but with each new update we are seeing improvements.

Snapchat began with an original concept. Users could send each other pictures or videos with an expiration date. Don’t blink, because once you click on a picture, it will be gone and never able to return. Not even the creator could see it (hence, the ghost mascot). You can probably see how young people would find this entertaining, but businesses wouldn’t really find a use for it.

One of the more significant updates in Snapchat’s history is Stories. There, viewers can see pictures and videos of the creator’s choosing for up to 24 hours. It was just enough for businesses to begin to flock to the mobile app.

Yet the biggest issues marketers face is Snapchat’s lack of reachability. We’re not talking about numbers, there’s already 100 million snapchatters out there and that number is sure to grow as younger internet surfers flock to the eccentric software. We’re instead talking about Snapchat’s lack of searching power. If you know a user’s exact username or their Ghost-styled QR code, you won’t have a problem. But what if a user just wants to search your name? They may have difficulty finding you.

There is a helpful third-party app called GhostCodes, in which you can search their database of Snapchat accounts. You can find them based on industry, name, or subject matter. It is a helpful app that Snapchat itself could learn from.


Social media video rules apply with Snapchat. They are short and able to have a filter. Just very recently, Snapchat added their Memories feature. This allows users to upload pictures and videos from their device’s camera roll. They are slowly shifting away from “once and done” style they used to have and grew popularity through, but in the same token they are gaining the attention of serious social media users.

The most unique and fun features  Snapchat offers is Geofilters. They utilize a smartphone’s location services and present overlay graphics that are exclusive to the area. You will find a special Tampa filter in Tampa, Denver filters in Denver, you get the idea. Businesses can also make their own, but that is a bit of a process.

It’s time to start thinking about Snapchat but most importantly, it is time to see how video can help your online marketing.