Facebook Tries To Be A Cool Kid With Lifestage 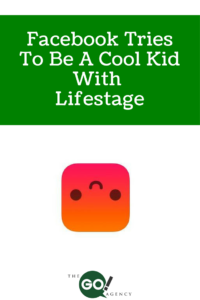 When Mark Zuckerberg first released Facebook into the world, its original purpose was meant to help college students to connect. In fact, you couldn’t even sign up if you didn’t have a .edu email address. Obviously, all that has changed. Now, everyone and their grandma (literally) has a Facebook page. This year, the primordial idea of student exclusivity is resurfacing in a new app called Lifestage. However, Lifestage’s demographic is quite a bit younger than Facebook’s original goals.

This new app is quite a unique platform. Its target demographic is teenagers and aims to connect fellow students from the same school. In fact, you can’t sign up for this “Facebook Jr.”  if you’re over 21 years old! Perhaps, this is a way to protect the young internet surfers, but the app itself actually has no privacy features in an attempt to be as transparent as possible.

It should come to no surprise to anyone that Snapchat’s design heavily influences the rest of the app. Lifestage offers entertaining filters to decorate the videos much like the popular platform already does. Yet unlike Snapchat, posts are always visible. A surprising feature of this app is that it only allows video content. The teenage users can easily peruse through emoji-clad profiles like a Facebook profile, but there will be no static pictures. It seems like video’s reign is changing even the selfie.

Despite Lifestage technically being a new social media profile, marketers shouldn’t get too excited for new advertising possibilities. Users’ reach can only go so far and there doesn’t seem to be any advertising options (yet). What this app does show is how much video is influencing social media in 2016, as predicted by many of the experts. Additionally, this is the second attempt from Facebook to create a “Snapchat clone”, the first being Instagram Stories. Snapchat has begun to show its potential as Millennials (and younger) are being gravitated towards the platform. It offers a certain sense of instant gratification that people crave. As such, video, smaller bodies of text, and interactive apps are shifting the way we approach marketing.

My first question would be what happens if hypothetically Lifestage takes off, and these users outgrow the 21-year-old age limit? Will they be denied access to their favorite platform and all the videos they’ve accumulated during their childhood? Perhaps Facebook should integrate a “Grown Up” button, which will convert an account into a fully grown Facebook profile when the time comes.

It’s unclear just how effective Lifestream will be. Facebook has a long list of failed children. From Paper to Slingshot, there are several apps that Zuckerberg’s team has created that just didn’t take off and now only reside in the history books. At the time of this blog post, Lifestream only has a 2.5 out of 5-star rating. Still, their attempt to prime the next generation for a video-dominant social media landscape speaks volumes about just how much Facebook not only likes but needs video to be on their side.