For the rest of the summer, The Go! Agency blog will focus on the social media habits of different industries. For each week in August, our first blog will explain common mistakes made by an industry; our second blog will explain how to fix those mistakes.

To show you how quickly and easily these mistakes can be corrected, we’ll examine the mistakes of Atlantis Beer Company. (Note: This example is a hypothetical case study that combines features from several different situations. Names, locations, and other details have been changed to protect the privacy and anonymity of source examples.)

Brothers Arthur and Orm took over Atlantis Beer Company after their mother retired. ABC has a larger brewery with an attached tasting room, restaurant, and events hall. Arthur is the brewmaster, Orm is the sales director, and Mera–Arthur’s wife–is the tasting room manager and events coordinator. We’re mostly referring to the brewery’s Instagram page, but they also crosspost to Twitter and Facebook. 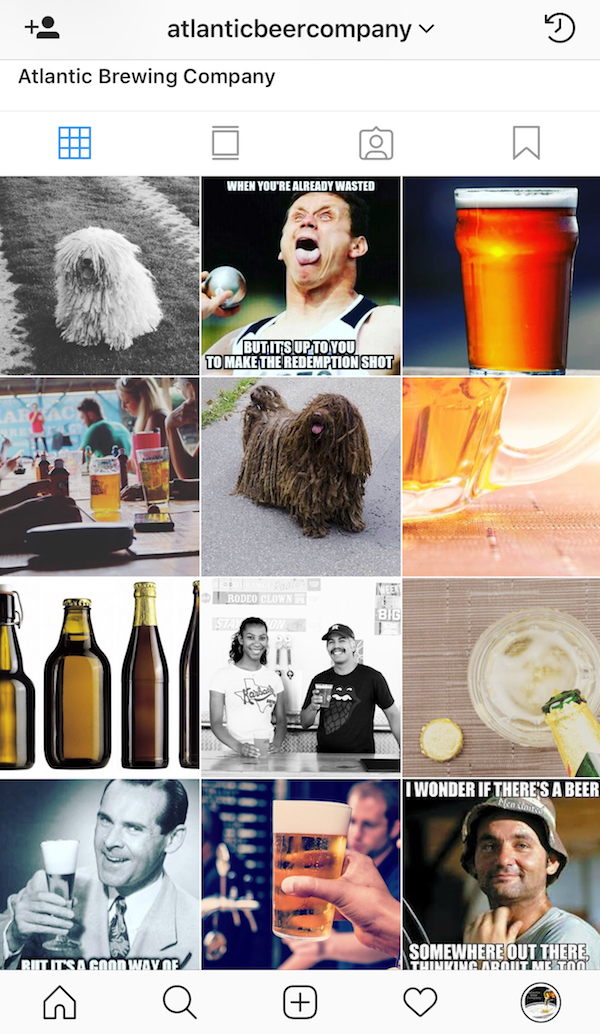 Mistake #1: Content Issues
Unfortunately, none of the three leaders really has the time to manage ABC’s social media accounts, so they rotate every month. Mera and Orm have a more serious tone, compared to Arthur’s laid-back aesthetic. Mera keeps everything concise and clear, and her image posts are often minimalist photos of beer against plain backdrops. Arthur favors a more casual approach to social media, so his months feature pictures of the crew, behind the scenes shots, and photos of his Hungarian puli, Topo. Orm’s posts are almost all promotional in nature, sometimes including jargon that is almost incomprehensible to anyone who is not a sales professional. Their approaches are so dissimilar that it almost seems like their social media accounts switch to a different business every month.
Solution: Get organized.
The leaders of ABC need to get together and develop a strategy for their social media presence. They are all over the place content-wise, and at the same time monotonous! While it’s good to have a mixture of staged and candid photos, they are all over the place tonally. They need to decide what overall style they want for their brewery. After they’ve settled on a consistent tone, they need to devise a content schedule so that they can more evenly distribute types of content for their social media pages.

Mistake #2: Wall-to-Wall Promotion
Orm, as the head of sales, feels like he must take every opportunity to push their product. He showcases every new beer release, every new menu feature, et cetera. Orm believes that every encounter with a customer is an opportunity to sell, and he is an opportunistic guy.
Solution: Vary your content.
Orm might be great at sales, but he doesn’t know a lot about marketing. Social media marketing is all about connection and communication, not pushing a product. Don’t bombard your followers with sales pitches. Allow your brand to speak for itself: show, don’t tell. Instead of telling followers to buy your new beer, show the release party. Instead of telling followers how popular your brewery is, show the tasting room on a crowded weeknight. On a similar note, share news about beer festivals and other events featuring your brand. If you’re sponsoring a charity event or cause, post about that too!

Mistake #3: Too Many Memes
Garth and Jackson, bartenders, both love a good meme and share them with Arthur, who in turn posts them when he’s in charge of social media.
Solution: Use memes sparingly.
Memes can be hilarious, but these internet jokes get old quickly and tend to age poorly. Post memes rarely, if at all.

Mistake #4: Inconsistent Posting Schedule
Mera tries to post at least three times every week, but the days and times vary. Orm will post a few times a day in the weeks leading up to a new release, but then gets too busy to follow up and sometimes even forgets to update the page for several days. Arthur at least tries to stay consistent, but he hates having to stop what he’s doing and post according to schedule.
Solution: Schedule your posts ahead of time.
There are many programs and tools that allow you to pre-schedule your social media posts. You won’t have to worry about remembering to log in every day or however often to post content. A good scheduling program will also enable you to crosspost to different platforms.

Mistake #5: Sub-Par Visuals
Arthur’s casual approach to social media is great for showcasing ABC’s company culture, but his cavalier attitude toward picture quality is terrible for ABC’s overall image. Judging by his photos, Arthur apparently thinks that blurry images seem more candid.
Solution: Commit to using better images.
Social media posts with images are just more successful. On Facebook, posts accompanied by images receive over twice the engagement as posts with no images! Tweets with images were favorited 89% more often than those without images, and were retweeted 150% more often than non-image tweets. Knowing these facts, would it still be acceptable to post bad pictures? Of course not! You don’t need to hire a professional, but your photos do need to look polished. Luckily for ABC, Tula–their brewer and quality control expert–happens to have minored in photography and is willing to help out with visuals.

As you can see, the biggest part of fixing these issues is simply committing to doing so. You need to take social media seriously, no matter your industry. Small breweries are a bright spot during this uncertain economic time (The Atlantic explains more about their impact on the U.S. economy), so they should capitalize on their unique position.

Do you need help with your social media marketing strategy? We can take your SMM to the next level! Contact The Go! Agency today for a free consultation!