For the rest of the summer, the Go! Agency blog will focus on the social media habits of different industries. For each week in August, our first blog will explain common mistakes made by an industry; our second blog will explain how to fix those mistakes.

All the mistakes we discussed in our previous post can be quickly and easily corrected. Today we’re profiling a venue that needs some guidance with social media marketing strategy! Although we focused on a performing arts venue for our example, these solutions can apply to venues of every type. (Note: The following example is a hypothetical case study that combines features from several different situations. Names, locations, and other details have been changed to protect the privacy and anonymity of source examples.)

Les and Louis bought and renovated the old Coven Street Theatre with plans of transforming the dilapidated dance hall into a community hotspot. They have an eclectic mix of bands and events, including charity concerts, weddings, folk singers, quinceañeras, gothic rock shows, stand-up comedy, film screenings, and even open-mic nights. Claudia, their intern, is doing the best she can at running their social media profiles, but she admits that she’s overwhelmed.

Louis and Les agree that crowdsourcing photos from their audience members during concerts and other events is a great way to increase engagement–and an easy way to score free images. However, Louis wants Les to be more discerning when it comes to choosing which photos to post. Armand, a professional photographer and Louis’ boyfriend, has often pointed out that they chose inferior shots when better pictures were available.

There is only one solution to this problem (and, yes, we will discuss it in every blog of this series): you must get serious about visuals! Do not settle for low-quality photographs. Your audience sees your venue through the photos you post on social media; if you post amateurish, poorly-lit, badly composed, and otherwise low-quality images, that is how they will view your venue. Online visuals often provide first impressions: people will pre-scout before actually visiting a space.

Louis wants Armand to take a few photos during events, but Armand refuses to work with Les. It seems that Les has gained a reputation for using images from professional photographers without asking permission or giving proper attribution. Although he never used any images for promotional or marketing purposes, Les has alienated the photography community to the point that few pros are willing to work with him (or at his venue). Even wedding photographers are reluctant to shoot at Coven Street!

All you need to do is get a photographer’s permission to use the photo and then properly attribute the photo. Professional photographers are professionals: what you might consider a hobby is their actual job! They want credit for their work. If you don’t know who took the photo, then don’t use the photo. It’s a good thing that Les never used any of the uncredited images in Coven Street’s promotional materials because that would have been grounds for a lawsuit! Les made it right (after a great deal of harping from Louis), but he could have permanently alienated an entire industry. Louis and Claudia had to spend hours correctly attributing old photos–time that could have been used more productively if best practices had been followed from the beginning.

Even if their photos are sub-par, their posters are on point! Yvette, Coven Street Theatre’s events coordinator, designs all of their promotional materials. Louis loves her aesthetic (she moonlights as a freelance graphic designer), so he encourages Claudia to use Yvette’s posters as images whenever possible. Additionally, Yvette has told Claudia to promote every public event at least twice a day on each of Coven Street’s social media accounts. They need to spread the word, right?

Solution: Shake it up a bit.

Posting news of upcoming events and shows is informative. Only posting news of upcoming events and shows is boring at best, obnoxious at worst. Social media is about connecting to your followers, not pitching to them. Think of it as an opportunity to humanize your business. Post about your staff or give your followers a glimpse behind the scenes. If your venue is historic or in a historic neighborhood, promote that aspect! Show your audience why you love your venue–and why they will, too.

Where do people go before and after a show? If your venue doesn’t have a kitchen or a bar, are there restaurants or bars in the neighborhood? Are there any hotels or bed-and breakfasts conveniently located nearby? Connect with your neighbors, in person and on social media. Consider running specials with your neighbors. Wedding guests could receive a group rate at a hotel, or nearby eateries could offer discounts to ticket holders of your venue. You could promote other businesses, as well: keep a list of preferred vendors for special events. With cross-promotions, everyone wins!

Les and Louis don’t have a lot of the social media problems common to many venues (Claudia takes her duties very seriously), but the problems they do have are pretty major. However, each can be fixed with a change in attitude and a minor change to posting habits. We’ve placed before and after shots of Coven’s Instagram profile below. As you can see, they have addressed all of their issues, resulting in more engagement! 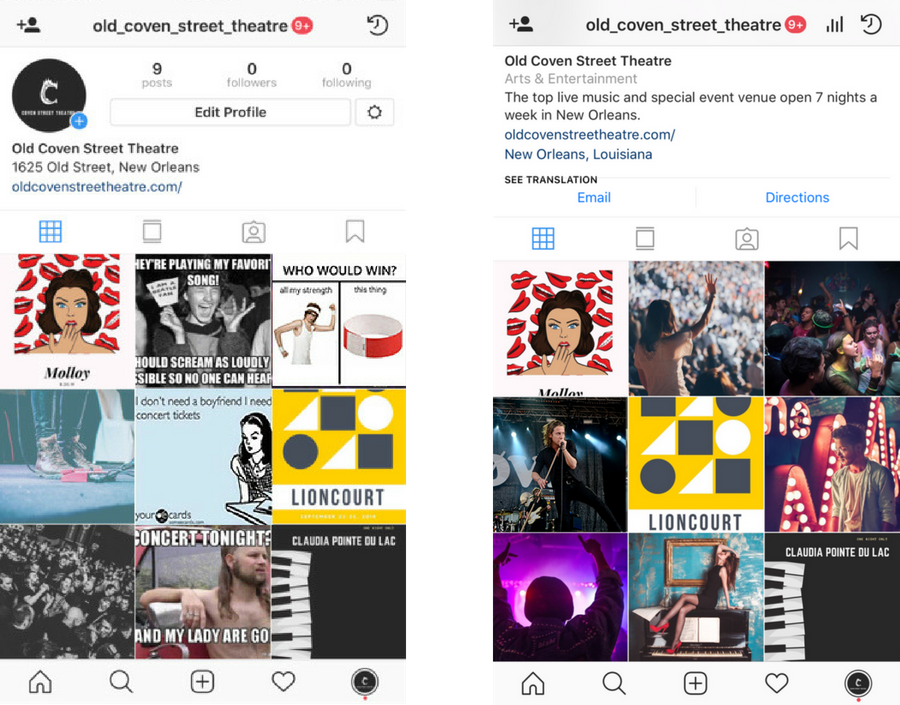 Is your venue properly showcased on social media? We can help you optimize your social media strategy and maximize your results! Contact us today for a free consultation!