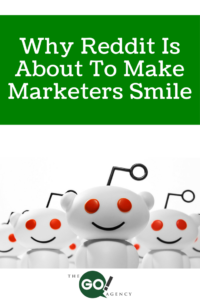 From its inception, Reddit seemed to be the exception to many social media rules. Yes, you talked to people, but not people you knew in real life. You could like (or upvote) content, but you could also downvote it to internet oblivion. As popular as it is, Reddit always seemed to be an alternative to mainstream tactics. Well, one major change is in the works for the website, and marketers are sure to smile.

Reddit announced a new plan to feature sponsored posts online. This is a significant change for the platform, as it tried to keep advertising to a minimum. Unsurprisingly, like everything else with Reddit, this update is just slightly different than Facebook, Twitter, and Instagram. This marketing effort will do something truly unique, which will allow brands to sponsor user generated content. This means that if a company sees a post that puts their product in a positive light or is relevant to their industry, they can work with Reddit administrators to sponsor that post. Reddit will then ask the post’s creator for permission, and if everyone is on the same page, magic will happen. The user will be compensated with gold. No, not real gold, but rather Reddit Gold which is their premium service.

As you could imagine, this is something untested. Since “Redditors” have an aggressive stance on any corporate advertising, Reddit CEO Steve Huffman hopes this will be a natural and non-intrusive way to make revenue. By actually helping content instead of being a distraction, the reception may have a better light than previous attempts.

One thing Reddit and its future sponsors should be wary of is reposts. Like all other social media platforms, users tend to repost pieces of content that were not originally theirs. At times, Redditors will acknowledge this, while others are simply taking trying to get some internet glory through another’s work. Perhaps a simple reverse image search could solve some situations, but deeper digging may be beneficial to the company.

If advertising is implemented correctly, Reddit may be able to gain some steady income which will result in better upgrades for the site and it’s all uphill from there. This update shows just how important advertising is for social media platforms and marketers need to take advantage of this need. Because of this, they will deliver extensive benefits to brands and companies. Reddit’s new service is scheduled to launch August 4th.

What do you think of Reddit’s new advertising venture? Comment below!