YouTube’s Iron Fist: What It Says About Social Media 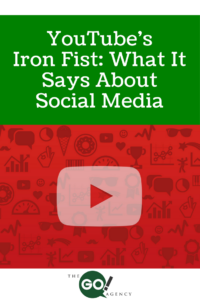 Ever since people realized that they could say whatever they want on the internet, there have been people trying to figure out rules, restrictions, and ultimately, censoring.  Obviously, once “censor” starts to be thrown around, all content creators’ ears perk up. Many creative individuals, whether they are in a business role or not, have found a home on the wild wild web. Whenever a new law or chunk of fine print puts this freedom into question, people become restless. Right now, YouTube has started a new content-related quarrel.

The social media platform and video hosting site, YouTube, and its owner, Google, may have started something they weren’t entirely ready for. Since its founding in 2005, YouTube has not only attracted a massive gathering but also many vloggers or, video bloggers, now earn a living by creating channels of content. YouTube hit one of its stars, Philip DeFranco, right where it hurts, advertising. They warned that certain videos of his breached their rules, and would take away their monetization and advertising features. No ads mean no revenue for Youtubers. Why is all this happening? In YouTube’s fine print, they mention that all content must be “advertiser-friendly.” As you could imagine, this means no excessive vulgarity, nudity, drug use, etc. Understandable, right? But YouTube’s recent crackdown targeted videos that were hardly offensive at all.
DeFranco wasn’t the only popular filmmaker to receive one of these notices. However, YouTube reps clearly stated that this is not a new rule, but rather a crackdown on previously existing conditions. As you could imagine, tensions are a little high in the YouTube world. Beyond who’s wrong or right, there are a few things social media marketers can take away from this:

It will be interesting to see just what happens in this swelling conflict. YouTube may have to loosen the leash. Vloggers may have to dial down the content (which is unlikely to happen). Either way, the internet, as always, is alive and well and full of changes, which professionals need to be ready to adapt to.