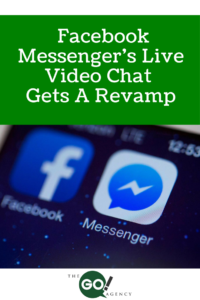 For those aware of social media trends, Facebook’s recent update should come as no surprise. Video, more specifically LIVE video, continues to shake the social media industry to its core, and Facebook once again takes note from Snapchat. Facebook has recently revamped their Messenger app’s live video chat feature. While an option that rivaled Skype has previously existed inside the software’s infrastructure for some time, this new update allows people to multitask just like, you guessed it, Snapchat. Users can connect through a live video chat while still reading other messages and checking out content.

While this may be a simple update, it speaks volumes. This is the third change from Facebook’s HQ in recent months that is very similar to a Snapchat feature. Check the other two out:

Instagram Stories – If any social media platform is a rival to Snapchat, it’s Instagram. They are both heavily based in the mobile world and operate solely with imagery-based content. However, Snapchat had an advantage with their “Stories” feature, which allowed people to view a friend’s recent updates from the last 24 hours. Facebook-owned Instagram had to fight back with their own version of Stories. Now, you will see a nice row of circular profile pictures encased in rainbow auras on your Instagram homepage.

Lifestage – A brand new mobile platform by Facebook that’s eerily similar to Snapchat in function and design. The only difference between Lifestage and Snapchat is its audience. It’s entirely for teenagers. Besides the age restriction, Lifestage has many similar qualities, including filters and video options.

With this new video tweak, we’re curious just how much Snapchat is impacting Facebook’s numbers. Regardless, we don’t think Facebook has anything to worry about anytime soon. Almost 2 billion people and companies use the site for networking and communication. Yet it does show just how powerful video is for social media. If the platforms are adapting, so must marketers.