What Social Media Marketers Can Learn From Pokemon Go 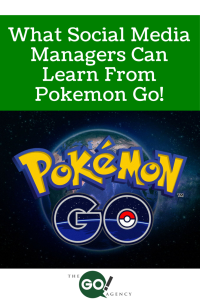 Do you remember the hit game Pokemon from the 1990s? While there have been several versions since Nintendo’s original incarnation, it’s popularity returned in a big way recently by tapping into the smartphone world where Pokemon Go, a completely new game, is available for free.

Not even Nintendo itself expected its new video game to take over the world as quickly as it did. Less than 24 hours after its release, Pokemon Go’s servers began to crash due to overpopulation on their digital frontier. Apple’s App Store and the Google Play Store both proudly house the massively popular game and at the time of writing this article, there are well over a million players trying to “catch ‘em all”.

Yes, it’s obvious that video games are popular. Yet by tapping into the mobile app market for the very first time, Nintendo has proven itself to understand the current trends in their field. However, there’s much more at work here than an app. From a marketing standpoint, they just accomplished a beautiful act.

Without getting into too many details, Pokemon’s popularity hit American shores in 1995 when their first two games debuted on Game Boy, the premier mobile gaming platform at the time. Children ate it up like it was the end of the world. Merchandising exploded. A TV show, a card game, action figures, stuffed toys, candy, clothing, themed stores, and much more took the world by storm. It was a marketer’s dream. Now, those children are in their mid-twenties and early thirties and have put the Game Boy down in place of an iPhone or Android device. Nintendo adapted perfectly to their original audience. Best of all, they made a majority of game play for free.

So, as social media marketers, what can we learn from this rising phenomenon? For one thing, watch internet trends closely. No surprise #PokemonGo was one of the top hashtags for quite some time. Brands that were able to somehow pull Pokemon Go into their social media posts received a nice spike of engagement. All over Facebook, Twitter, Instagram, and Pinterest, there were tons of Pokemon-related posts. Keep in mind that all of this publicity is free. Nintendo hardly advertised this app at all!

Social media marketers should also take note on just how ingenious Nintendo was to tap into their original market. Surely, today’s children could probably borrow their parents’ phones and play, but the numbers are coming in and it’s not a surprise to anyone that the most downloads are from those same people who played the original version. Nostalgia, it is one heck of a marketing tool.

Pokemon Go would not have been as much of a success without social media and you can take advantage of the firepower of these platforms just as easily.

What are your thoughts on Pokemon Go’s quickly rising popularity? Comment below!