Social Media Around the World 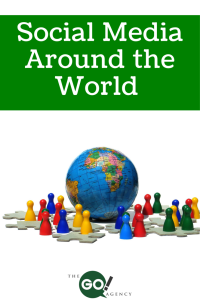 The point of social media is to connect the world’s many citizens. Through this technologically based revolution, we’ve kept in contact with people that would never be possible otherwise. Thanks to international phone charges, we would never be able to hear our loved one’s voices if it wasn’t for some of these platforms. However, are we as connected as we’d like to think? Just because we’re all using social media, it doesn’t mean we’re on the same platform. All over the globe, there are numerous popular social media websites that claim hundreds of millions of users, ones that Americans most likely never heard of. You’d be surprised just how varied the international waters of social media are.

It’s no surprise Facebook reigns supreme in North America and many other countries. It has approximately a whopping 1.5 billion members, just for its core website. They also have their Messenger and Live services, which are both growing exponentially. It’s safe to say that Americans think of Mark Zuckerberg’s brainchild when the term social media comes up in conversations. Twitter, Instagram, and LinkedIn all have millions upon millions of users and help countless businesses every single day. Our beloved social media websites stretch beyond our waters and we see many of them being used internationally, but they have much more competition out there. So, enough about the social media companies we all know about and let’s meet their contenders.

One of China’s largest social media websites, Baidu Tieba, also doubles as a highly developed search engine. Just think if Google and Google + combined, then decided to add a ton of awesome features. It has approximately 300 million users. Baidu Tieba’s websites proves it goes beyond a traditional social media design with it’s multi-facet functionality. It offers forums called bars, similar to Reddit’s subreddits, a news page that allows you to research many niche topics, gaming, and even more. It’s a one stop shop for China’s internet users.

Yet taking China’s size into consideration, Baidu Tieba can’t be the only social media platform that its citizens flock to. Sina Weibo, or just Weibo, is another extremely popular website that offers services similar to Tumblr. Microblogging has been around since Live Journal’s popular run. Some cultures and subcultures appreciate this kind of social networking more than others and Weibo’s success just shows how vibrant blogging still is. Steven Hawking made a social media account, one of the few Westerners that have, and he received over 1 million friend requests in 24 hours.

Most of us have seen WhatsApp. While it isn’t as intuitive as Facebook and Weibo, it certainly solves a social problem. That being said, WhatsApp has its work cut out itself in the global front. With Skype, Line, Yy, WeChat and more, the concept of free texting, calling, and video chatting is wide spread and each one covers its own multitudes of users. KakaoTalk dominates South Korea’s messaging services, but also doubles as a more traditional social media platform, offering profiles, pics, videos, and news feeds. KakaoTalk is attempting to have a global reach, but mostly has a large following in Asia.

Now, a question you might be having as a businessperson is, how do I sign up for all these platforms, sending my reach to global heights? That’s one of the down sides. Many social media platforms are limited to your specific region and, depending on your country’s laws, you might not be able to access all these sites. Even Facebook, despite its international reach, is not accessible in all countries.

Social media is a global phenomenal, whether it is traditional social networking, communication lines, or blogging. This shows just how important it is to get yourself established in the social media platforms you have available. You should also be willing to try out websites that aren’t as popular in the US.

Do you have any experience in any of these internationally renowned social media sites? Comment below!