Blast from the Past: A Look at the Digital World 10 Years Ago

Remember what the digital world was like in 2009? It might not feel that long ago, but 10 years have passed! With all of the forward-thinking technology that’s made its way into our lives and the constant changes of the online marketing landscape, there’s a lot to reflect on.

So, where do we start?

Let’s dive right in and take a look back at some of the biggest trends and predictions from 2009.

Apps, Androids, and More
There’s no doubt that 2009 was the year that the tech world was booming—and for good reasons. For starters, Apple was paving their own way with the rising popularity of the App Store, which first came to life in 2008. With the release of the iPhone 3GS, mobile users were also introduced to in-app purchases which allow developers to still offer their app for free.

And let’s not forget the steady competition that Apple now faced with Android. Mobile devices with this operating system were—and in some ways, still are—cheaper alternatives to the Apple products. Users also got to experience Google’s own version of the app store.

But…which app really made a difference in peoples’ lives?

Would you be shocked if I told you that it was turn-by-turn auto navigation? Yep—the iPhone started to give GPS companies a run for their money by providing mobile users an app offered by TomTom. The catch was that you needed to pay $100 for the app, which if you think about it, isn’t awful considering you would be paying that same price or higher for a GPS device on its own. Although, in the distance, you could hear Android users rejoice at the fact that a similar software was being offered on their phones for free.

In addition to the new wave of smartphones and apps came the steady rise in sales of netbooks, Amazon’s Kindle, and tons of other tech products that seemed to make life just a little bit easier.

Predictions For the Future of Digital and Online Marketing
You’re probably thinking, “Wow, we’ve sure come a long way in the past 10 years.” And, you know what, you’re right! At the time, these technological advances were no doubt next-level. Even though consumers had access to the best products yet, there was still hope that both the tech and online worlds would evolve into something even better when 2010 came around. That’s where a few key predictions were made.

Both online video advertising and video streams were thought to increase in the next year along with the rise of digital ad spending. In addition, it was predicted that many brands would start utilizing more targeted ads in the future to really aim themselves at the right customer; although, more consumers were predicted to utilize ad-blocking software.

With the rise of mobile usage and apps, it’s no surprise that many social networking sites and apps were predicted to only get bigger and better in 2010. For example, Twitter was thought to continue building its audience as one of the “newer” social media channels. Spotify had also just begun to climb the ladder as an audio streaming service, and Netflix was teaming up with electronic companies to bring video streaming straight to consumers’ TVs. Many believed that streaming services like these would become dominant within the average home.

Flash forward to 2019, and many of these predictions have come to life. It’s no secret that as time goes on, the tech world continues to evolve and improve. Reflecting on everything that’s been accomplished in 2009—and now in 2019—makes me excited to see what’s next in the future!

What do you think the next trends will be in the future?  Let me know in the comments below!

END_OF_DOCUMENT_TOKEN_TO_BE_REPLACED

Hashtags And Hot Topics: A Marketer’s Responsibility To Stay Relevant 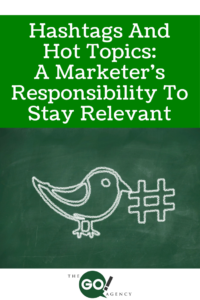 Social Media
Thankfully, we are now in an age in which we know about events as they happen, as opposed to years ago when we would only know via the next morning’s newspaper. Social media has continuously been a driving factor in bringing important stories to anyone and everyone.

When social media marketers promote their brands on Facebook, Twitter, and other platforms, they need to keep the NOW in mind when creating content. Sometimes, the news is to their advantage, while other situations raise the need for delicacy.

Of course, incorporating trending topics is always a great way to boost engagement. Whether it’s #MerryChristmas or #ThrowbackThursday, joining a universal conversation can be very helpful. However, keeping your brand relevant isn’t only about spreading good wishes. Sometimes, marketers need to watch the top news stories to learn what NOT to talk about.

A perfect example of this would be when Amazon advertised a bowl decorated with the words “Cereal Killer” on their Facebook and Twitter. Unfortunately, this update published right after the Pulse nightclub shootings in Orlando. As you could imagine, the feedback was not so great. It was a case of writing the wrong post at the wrong time, surely a mistake, but it’s still a lesson to all marketers. We have a responsibility to our readers and brand to steer clear of sore subjects and stay aware of what’s happening in the world.
As many marketers use scheduling tools to stay ahead of the game, we need to keep in mind what we have ready to send out. If something happens that may put certain content in a negative light, you better “stop the presses.” As always, be sure to steer clear of anything political, religious, or controversial, unless you’re willing to put out a firestorm.
While “keep things light” is a nice mantra to stick to, sometimes even the smallest comment could cause problems. If this kind of situation does happen, don’t ignore it. Offer a public apology and see to it that it doesn’t happen again.
Share your thoughts below!